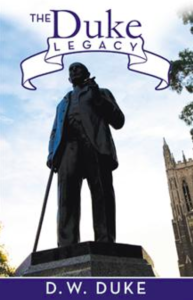 Washington Duke is very young when he first realizes there is racial discrimination in the South. Living outside of Hillsboro, North Carolina, in the mid-1820s, he is one of ten children in a family that shares the wilderness with bears, rattlesnakes, and mountain lions. Washington learns about the world around him from his scholarly father, nurtures a compassion for others, and eventually grows into a man deeply troubled by the institution of slavery. Unaware of what awaits him, Washington is conscripted into the Confederate Army and reluctantly leaves his three-hundred-acre farm in 1864 to fight in the war.

When the Civil War is over, Washington is left widowed, with nothing but his farm, two blind mules, a wagon load of tobacco, and his four children. Determined to rise from the rubble, Washington soon begins building the foundation for the Duke financial empire—although not without challenges. As Washington ages, his sons eventually capture his dream to establish Duke University. Even with the family’s successes, though, there is tragedy and heartache; Washington’s granddaughter, Doris, dies under suspicious circumstances in 1993 and her estate becomes embroiled in a legal battle.

Based on a true story, The Duke Legacy is a compelling and inspirational tale that examines the life of a gentle giant and his descendants who, together built a multibillion-dollar empire, numerous charitable foundations, and a renowned academic institution, proving that anyone can overcome adversity to achieve greatness.